Due to the popularity of these posts, I have decided to move all of the benchmarking information over to its own dedicated page. Please see the new framework shootout page for the latest information.

This post is the continuation of a series. Please read Round 1, Round 2, and Round 3 first if you are just now joining.

While I had originally intended for round 4 to showcase how microframeworks are changing the way we do "quick and dirty" web development (and how they make using PHP as "an extension to HTML" old hat), my current programming habits have kept me involved in the more "full-stack" framework solutions. So, rather than spitting out various benchmarks of frameworks that I have little or no interaction with, and since enough time has passed since the last "shootout" that the landscape has changed a bit (with the introduction of Pyramid and the release of Rails 3), I have instead decided to showcase the most recent data on the frameworks that I personally find myself in contact with on a regular basis.

Warning: Everything is different this time around.

These benchmarks were all run on a fresh Amazon EC2 instance in order to (hopefully) achieve a more isolated environment. Obviously, since these benchmarks have all been run on a completely different box than any of the previous rounds, no previous data should be compared with these numbers.

What you should know about Round 4:

Remember, nothing here is really all that scientific and your mileage WILL vary. Now on to the results...

The "Hello World" string test simply spits out a string response. There's no template or DB calls involved, so the level of processing should be minimal. 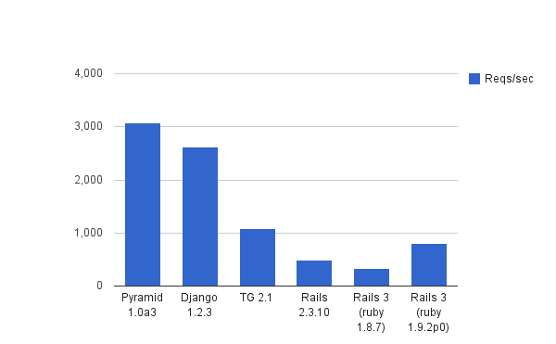 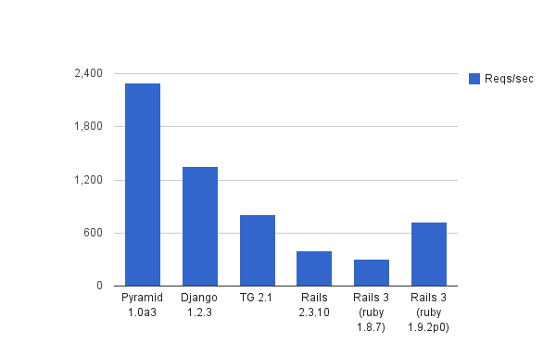 The template/db test simply loads 5 rows of Lorem Ipsum from a SQLite DB and spits it out via a template (thus engaging both the framework's ORM and templating system). 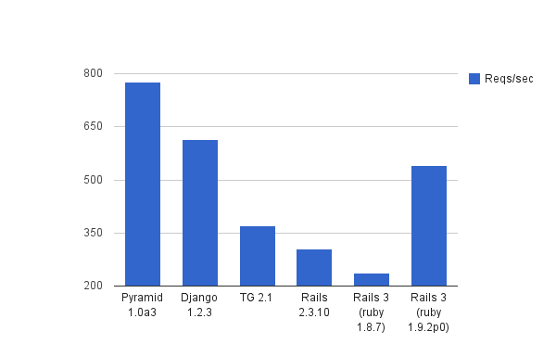